Talks by Abdul Baha Given in Paris 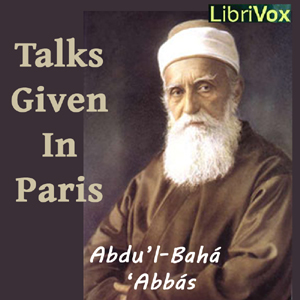 Talks by Abdul Baha Given in Paris

LibriVox recording of Talks by Abdul Baha Given in Paris, by 'Abdu'l-Bahá 'Abbás. Read by Nicholas James Bridgewater. “Much has already been written of the visit of Abdul Baha, Abbas Effendi, to Europe,” writes Lady Blomfield in her Preface to Paris Talks, “During his stay at Paris at 4, Avenue de Comoens, he gave short “Talks” each morning to those who crowded, eager to hear His Teaching. These listeners were of many Nationalities and types of thought, learned and unlearned, members of various religious sects, Theosophists and Agnostics, Materialists and Spiritualists, etc., etc. Abdul Baha spoke in Persian, which was translated into French. Of these “Talks” my two daughters, my friend and I took notes. Many friends asked us to publish these notes in English, but we hesitated. At length when Abdul Baha himself asked us to do so we, of course, consented—in spite of our feeling that our pen is “too weak for such high message.”” Paris Talks is a book transcribed from talks given by `Abdu'l-Bahá, the son and successor of Bahá’u’lláh, the Founder of the Bahá’í Faith, while in Paris. It was originally published as “Talks by `Abdu'l-Bahá Given in Paris” in 1912. `Abdu'l-Bahá did not read and authenticate the transcripts of his talks in Paris, and thus the authenticity of the talks is not known. Shoghi Effendi, the Guardian of the Bahá’í Faith, has said that while the texts are not authenticated, the compilations can still be used by Bahá’ís and in the future work will be done to find which parts are authentic. Lady Blomfield's copious notes are the basis of the volume. Lady Sara Louisa Blomfield [née Ryan] (1859-1939), who was given the title of Sitárih Khánum by `Abdu'l-Bahá, was the second wife to noted Victorian era architect Sir Arthur Blomfield, who died in 1899. She became a Bahá’í in 1907 and later served on the National Spiritual Assembly of the Bahá’ís of the British Isles for eight of its first eleven years.

Uploaded by librivoxbooks on September 28, 2010